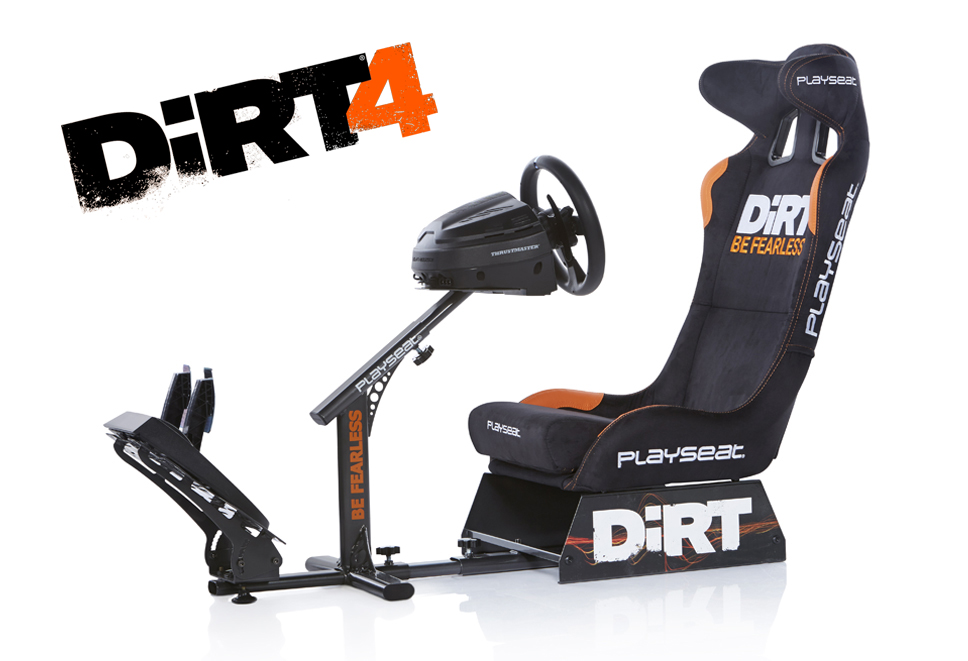 Let’s be totally clear: despite the ‘4’ on the name, this is categorically not a return to the bombastic, arcade-hued mayhem of Dirt 2. This is the still-beating heart of Dirt Rally, transplanted into the long-dead corpse of Dirt 3. The result is an incredibly hardcore simulation masquerading as an adrenaline-soaked, close-competitive racer. Fundamentally, that mix just doesn’t work.

What it does well, it does superbly. The rally section of the career mode is every bit as playable, enjoyable and hardcore as Dirt Rally, only now instead of hand-crafted stages, everything is procedurally generated. You can have a go at generating these stages yourself, moving two sliders for length and complexity, then setting the time of day and weather and hit generate. Don’t like what you see? Just press it again. That means virtually infinite new tracks, forever. A rally fan’s dream. 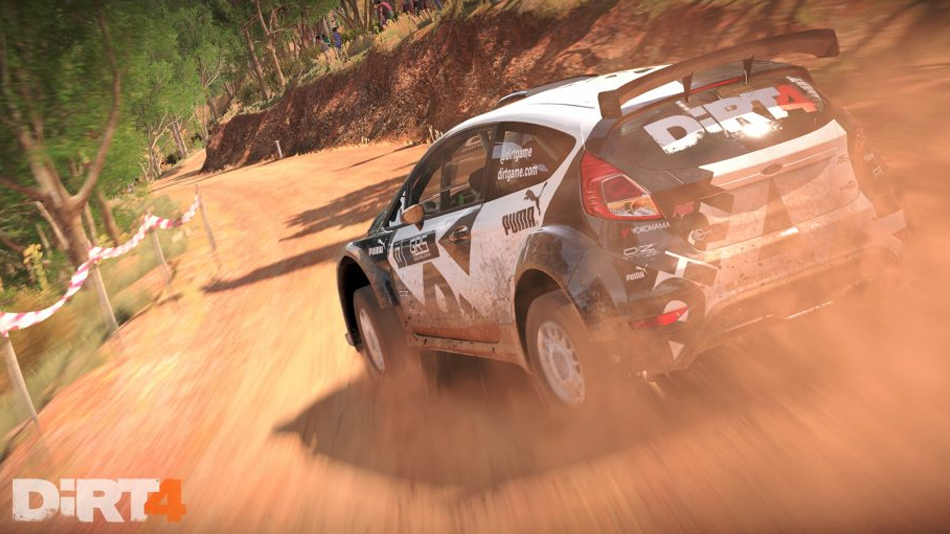 At times, particularly in fog, it’s absolutely beautiful. In sunlight, however, much of the foliage often looks flat and over-lit. The town sections are impressive considering they’ve essentially sprung out of thin air, but look closer and they appear at least a generation old. Maybe even two. Some parts of Dirt 4 feel cheap and that’s never been the case before.

The depth of the rally career, however, is exemplary. Teams and advertisers have clear expectations and you can see how happy you’re keeping them thanks to a simple gauge. You can hire and fire PR and engineering staff, and their pay comes from your budget, meaning at least some degree of money management is necessary. It’s also online-integrated, with daily, weekly and monthly challenges to attempt, which are massively enjoyable thanks to leaderboards throughout. Dirt 4 is definitely worth buying if you finished Dirt Rally and longed for more. 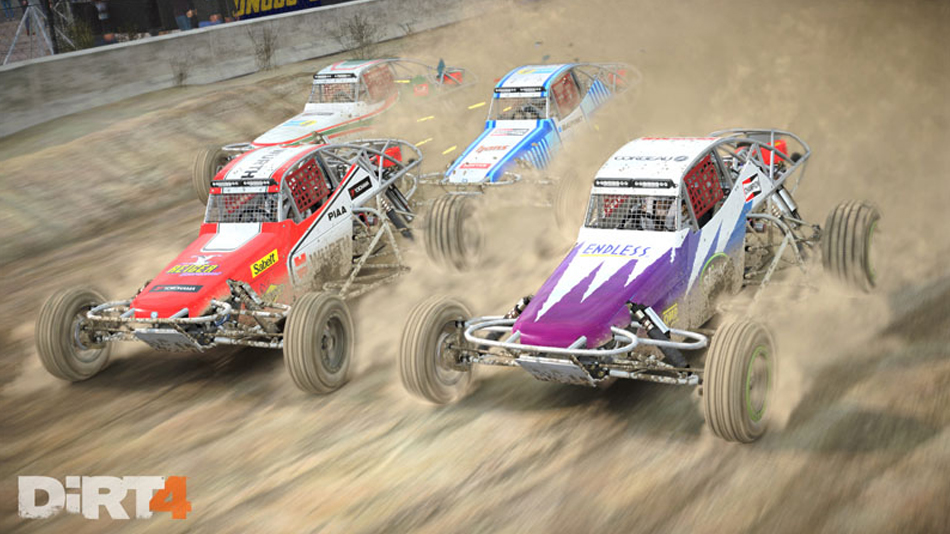 So the rallying is superb, but main-series Dirt is more than just rally. It became famous (or infamous depending on your viewpoint) for offering a wealth of racing variations, many of which featured over-the-top, automotive mayhem. These disciplines are back, but scuppered. Since vocal sections of the community have been clamouring for ‘realism’ over fun, anything even remotely arcadey has either been turned down from 11 to 3, or sidelined. So Dirt 4 has close-contact racing but milder damage. It’s got sunshine and dust but the artistic (lens?) flair is AWOL, replaced with diligent, often mundane realism. The courses have jumps but you won’t get massively airborne. The puddles are gone from races. The drivers have no personality other than a grimace if you fail. There is team radio, but it only passes on basic information and tells you to calm down if you get into a scrape. It’s not that the quality is bad. Every element and detail is incorporated with skill and finesse; it simply lacks character, or has been done far better before. At least the licensed soundtrack is superb.

There’s another, even bigger issue. Right at the start, you are asked to choose between ‘fun’ and ‘realism’. And it really is that literal. Apparently the days are gone where you could have both. My initial time with the game was spent solely on Pro handling because that’s what I normally choose by default. I love racing games, I know what I’m doing. But – and I appreciate I’ll get called a noob for this – I just couldn’t enjoy the buggies, trucks or cross karts on that setting, whether with a pad or a wheel. Rallying is actually OK in pro mode, but it turns out that simulating rear-wheel drive buggies racing in close proximity to each other on a bumpy, loose-surface track makes for an almost unplayable video game. If you owned a real dirt buggy, you wouldn’t want to tiptoe around tracks, you’d want to absolutely thrash the thing. But push even slightly and you’ll inevitably oversteer to the inside of every other corner.

This difficulty is exacerbated by overly-aggressive AI. They subscribe to the Ayrton Senna school of thought, in that if a gap exists they’ll go for it. Never mind that the gap is closing and will be gone by the time they arrive. Through no fault of your own, you’re left staring at the barrier, with no ‘Rewind’ button and, depending on your skill selections, a limited number of restarts. It’s incredibly annoying.

So I reluctantly switched to ‘Gamer mode’, at which point Dirt 2/3 raise their beautiful heads from the ground. The steering becomes more responsive, more assured and – yes, it tells the truth – more fun. The cars still oversteer and I had to use every trick in the book to win on higher opponent difficulties, but I’d describe it more as ‘worthy challenge’, not ‘actual hell’. In fact, it turns out Hell is in Norway. Worth knowing.

In Gamer mode, Dirt 4 is a far better racing game. Not exceptional, but enjoyable enough. You’ll still get barged about by the AI drivers, but you might be able to avert disaster if you’re quick enough to react. The Rallycross closed-circuit events are much-improved over Dirt Rally’s (and the ‘joker lap’ that requires a deviation into a longer route once per race is an interesting tactical touch), and the rally mode is still challenging and deep, even with the ‘Gamer’ handling enabled.

There are more gamey side modes – tucked well out of the way where they can’t offend anyone – where you can partake in some classic microgames like gate crasher, time trial runs with bonuses strewn around the route, and an in-depth tutorial mode. After the short introduction to the game, no single racing discipline is mandatory, so you can just play what you like, with enough content to make your personal game feel substantial, even before you take it online.

But a game needs more than ‘content’. Everything feels offensively inoffensive. Neutered. Dirt 4 doesn’t have an identity of its own. It’s a decent and capable modern racing game, but one that’s demonstrably outshone by Forza Horizon 3 and Driveclub in almost every way. The rallying is superb, but not everybody likes pure rallying. Nothing else here is anywhere near best in class. And while it feels sad to say it, the numbered Dirt series has always been unforgettable… until now.

Worth buying for its superb rally sim alone. But the returning racing modes are bland, frustrating and unsatisfying.