It’s taken 12 years and seven attempts, but Forza Motorsport has now firmly set the bar by which all other racing games will be judged. As well as creating a graphical showcase for not just the forthcoming Xbox One X but the standard Xbox One itself, Turn 10 Studios has also produced a game that rights the few wrongs of the last game and truly focuses on the player experience. The result is supreme.

The first key to Forza 7’s success is the control. The cars all feel ultra-assured, responding perfectly and predictably to control inputs, and allowing just the right amount of abuse. Sure-footed, careful cornering transitions seamlessly into a slide, breaks into an acre-long drift, and eventually hangs sideways before giving up on traction altogether. With deft throttle control that’s not only manageable but an absolute joy thanks to the Xbox One pad’s haptic feedback, you can hold the car in any one of these states, provided you have the skill. 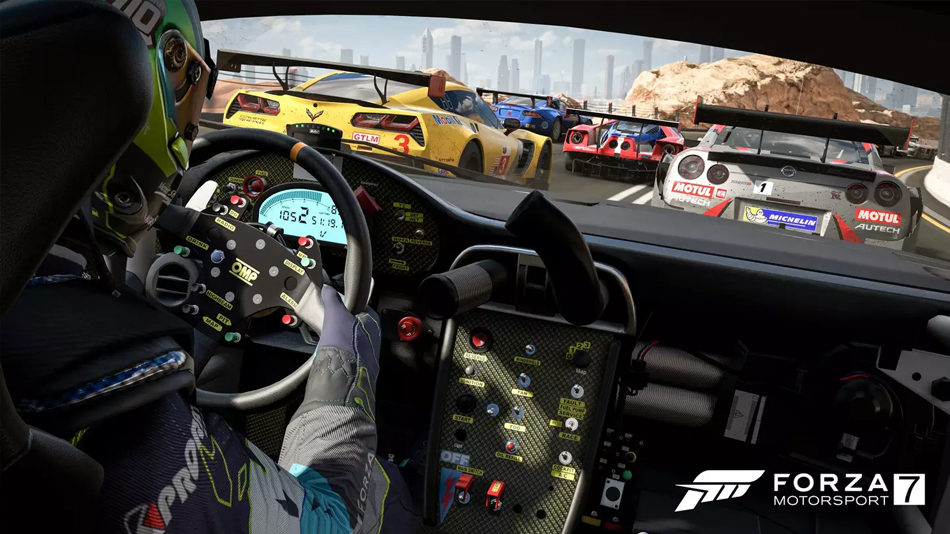 This is not a hardcore simulation like Assetto Corsa – there’s definitely some slight softening of handling principles that ease the gamer’s struggle against the track. For instance, you can save a car from a slide or kerb-ride that would undoubtedly have seen you facing backwards in Project CARS 2. The result is what some might call ‘simcade’ – a word that’s too often used disparagingly. But if it means a racing game that’s both realistic and fun, then simcade works for me. Authenticity and fun? Take my money.

So, the game makes it easier to get it right, but what happens when you get it wrong? Firstly, the series’ longstanding problem of ‘soap bar’ collisions is gone. Bumps and scrapes against other drivers look, feel, and sound right. Fenders dent and paintwork scuffs, and there’s some modest deformation of panelwork, too. Open-wheel collisions are toned down to prevent cars flipping, but that’s necessary when there are a lot of cars in close proximity. With so many cars on-track (a technical miracle), early laps are ultra-congested. Try to finish a single race without touching anyone – I bet you can’t. But this compromise between realism and fun is handled very well, and the game keeps moving as a result.

As for barriers, well – normally if you’re heading for the walls in Forza, you’d accept the inevitable impact and deliberately steer into the wall, aiming to slam the side of your car flush onto the Armco so as not to spin when you hit it. Well, Forza 7 tends to place covered tyre barriers in prime crash locations, and while they look like normal barriers, you’ll find the old method doesn’t work. The back will touch but the front will dig into soft, yielding rubber, sinking you deep into the wall’s enveloping embrace and sending tyres flying in a pleasant cascade of physics objects. This sudden stop really feels like a crash. And that makes a huge difference to how much respect you give the boundaries – especially if you switch off the returning ‘rewind’ feature. 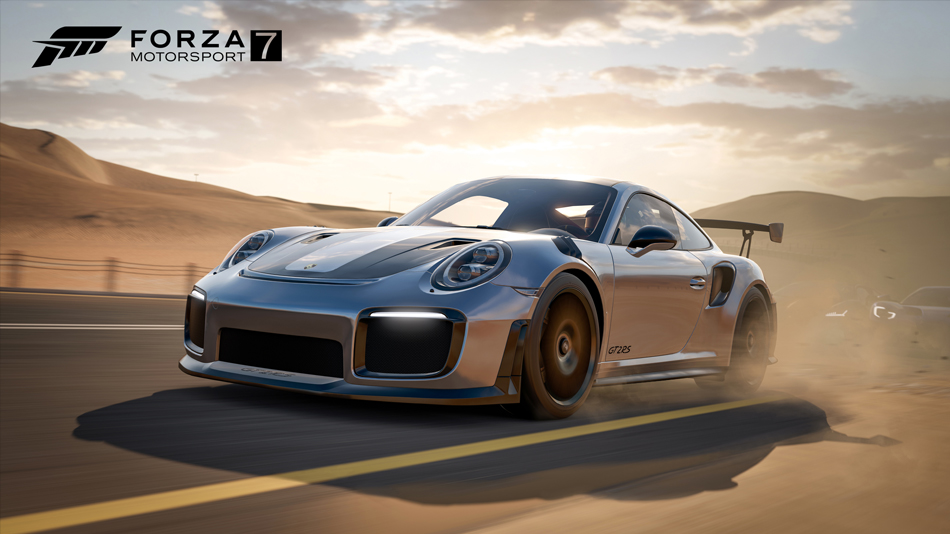 The AI is massively improved. No longer does one car zoom off into the distance; instead, cars stay in believable groups. It’s a little unrealistic to see them driving two abreast for most of the first lap, unwilling to settle into the traditional snake and slither procession along the racing line. When they do eventually settle, you’ll see them overtake each other, occasionally make mistakes (in the same places you will too, which is really good to see), and move to defend their position.

However, even on Expert AI settings, the computer-controlled cars tend to brake too much, giving you ample opportunity to overtake. This is actually necessary, since most career races start you near the tail-end of the pack, giving you a few laps to try and pass everyone else and win. It makes for an almost OutRun-like dash past other cars, especially on lower difficulties, which is terrific fun. Longer races are an option in career mode, if that’s your bag, but the 5-minute sprints are perfect for our attention span bereft generation.

There’s a toggle option for AI aggression, which is supposed to make them block and side-swipe, but it gets a bit silly, with side-swipes coming apparently for the sake of it. Switch it off, and you’ll still get nudged, but it comes across as much more natural. 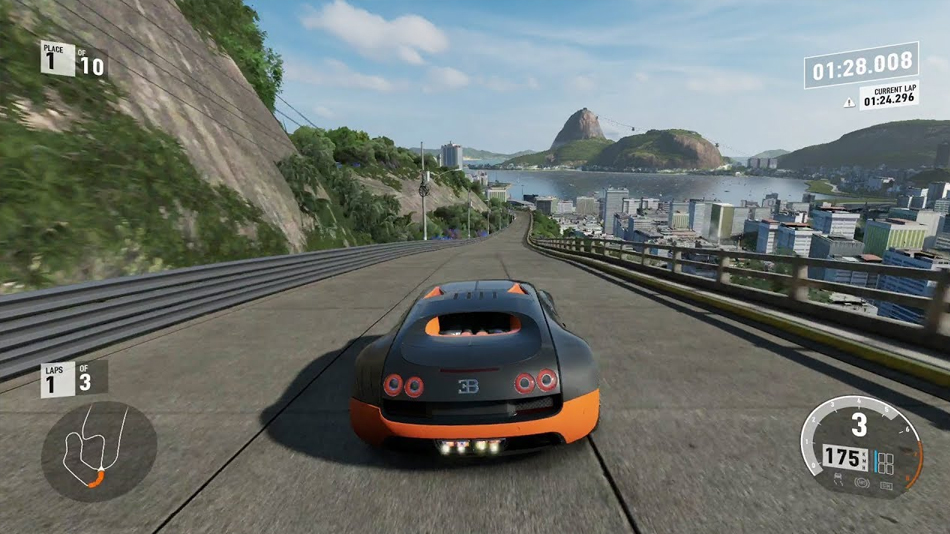 Mod cards return from Forza 6, and give you the chance to set yourself challenges in exchange for increased credit yields. Giving the already fun racing action some added goals makes for even more compelling gameplay. Saving up your boosted credits for an expensive Prize Crate is exciting, even if you often spend 300,000 credits only to win a helmet, some mod cards and a crappy car. But that just makes the real big wins all the more exquisite.

It could be argued that progression through the game is needlessly convoluted, with several arbitrary barriers to progression that all require significant playtime to completely overcome. Collection tiers are opened up according to the rarity and breadth of your garage’s contents, XP earned from driving gives you driver levels (again, with more prizes when you reach a milestone), and the Forza Driver’s Cup that forms your career mode has 5/6 tiers locked when you start out.

It’s the polar opposite of Project CARS’ mostly ‘play whatever you want’ structure, but the drip-feed of enjoyable content is more like a streaming faucet of automotive gorgeousness. This is an absolutely MASSIVE game, and the quality is consistently stellar across it all, chucking discipline after discipline of superbly-realised racing at you. You’ll have your favourite series, certainly, but I didn’t find one I actively disliked. Even the trucks are decent. 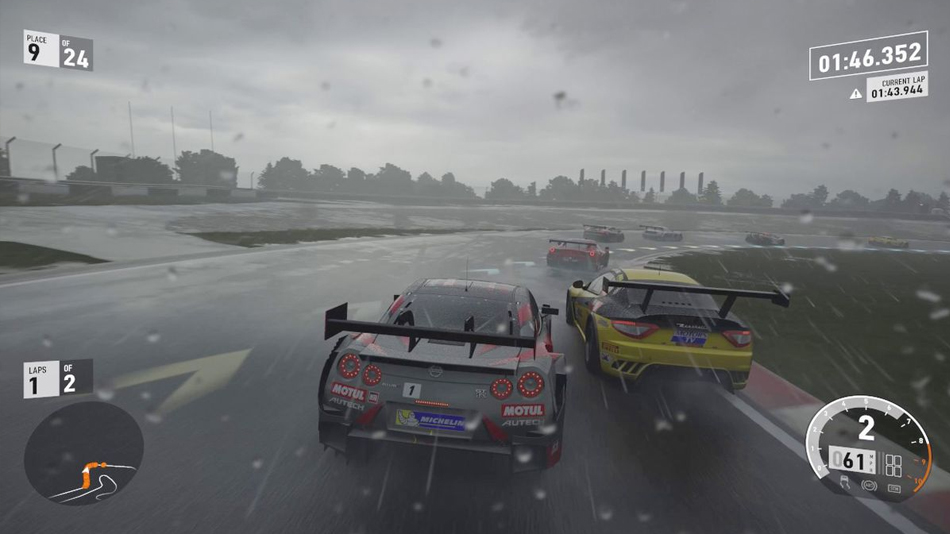 Main intro video notwithstanding, the presentation has lost is pretentiousness, with a simplistic guitar-music soundtrack reminiscent of the series’ roots, a charismatic voice-over guy talking you nicely through every aspect, and voice clips from real-world drivers and technicians. As a result, the game’s love of cars is expressed with the same authority and style, only without the previous self-congratulatory tone. It’s so much better.

What about Xbox One X? Microsoft’s new wonder-console wasn’t available for this review, so I was playing the game on my bog-standard, launch model Xbox One. And I’m not exaggerating when I say that it still blows everything else out of the water. Rather than compromise the base game to highlight X’s superiority, the game runs at an absolutely rock-solid 60fps, with zero screen-tearing. The advanced visual effects like lighting, shadows, dynamic weather, water spray, reflections and anything you could care to mention are superb. Mirrors are still 30fps, but considering Driveclub only manages 30fps full stop, this is the most technically proficient racer on the market. Direct comparisons between Long Beach on Forza 7 and Project CARS 2 reveal a huge gulf in quality. And PCARS2 is no slouch.

With some long-ish load times and still-underwhelming visual damage in major crashes, one day it will be bettered, though it’s unlikely we’ll see that happen in this console generation. There’s no other modern racing this good at what it does. Forza Motorsport 7 is the best serious racer on current-gen, and you need to play it.

Forza Motorsport 7 addresses every issue of its predecessor, turns the visual flair up to 11 and handles like a dream. An essential purchase. 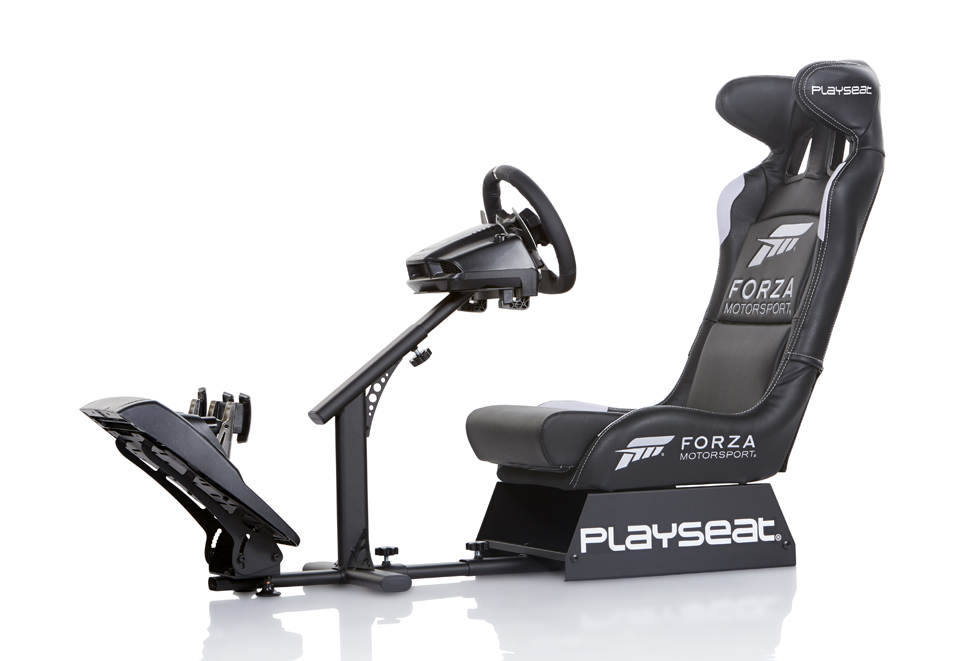