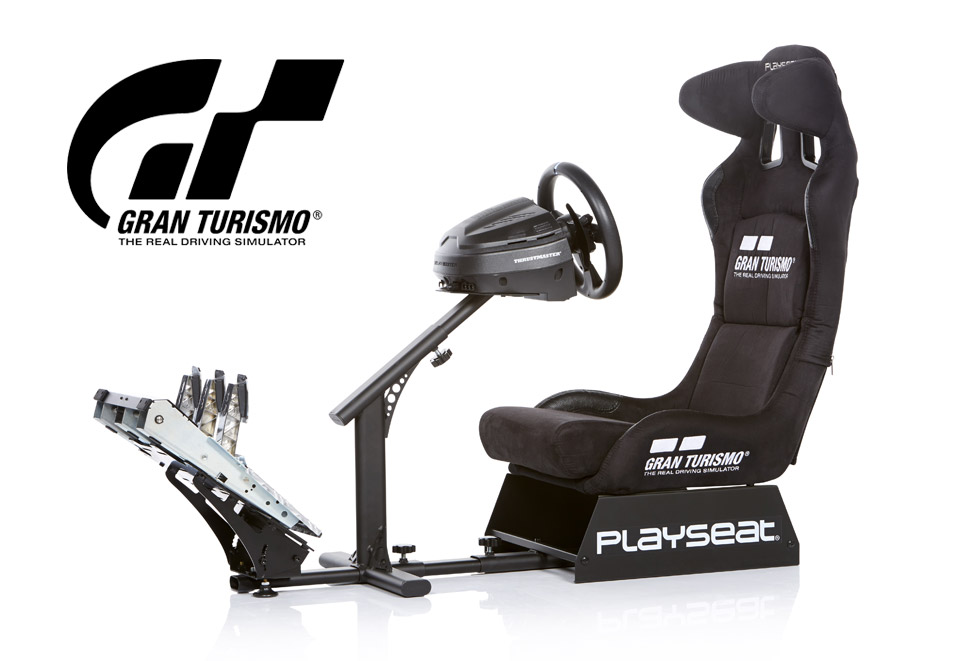 GT Sport is the straight-laced gentleman of the racing scene, and it’s very, very classy. It cares about sportsmanship, even forcing you to watch a ‘Driving Etiquette’ video before it lets you online. If it could put penalty points on your real life driving license for infringements in its online mode, it totally would. What it can do is award you a dynamic ‘Sportsmanship’ rating according to how nicely you drive in races, meaning everyone can see how sporting you really are. It’s quite the difference compared to its competitor, Forza Motorsport, which rewards drifts, drafts and perfect corners; GT rewards you for not being a dick. It’s wonderful, but perhaps a little naive.

Predictably, it handles beautifully. Control input is responsive, though realistically takes a short moment to go from lock to lock if you’re using a pad. The cars are sure-footed and weighty, and feel like they have more grip than those of Forza 7. Indeed, the game is slightly easier to drive than all-out sims like Project Cars, Assetto Corsa, or Dirt Rally, but it will punish you much sooner than Forza 7 will. The way the vehicles react to kerbs is exemplary: you can ride them if you’re brave, but they’ll bite you hard if you misplace a wheel. Push too hard or snatch at the brakes and you’ll also slide off into the gravel. Some cars seem built for oversteer, but most perform an enjoyably tameable 4-wheel drift when pushed over the edge of the grip cliff. The balance is just right – this is an extremely playable game. 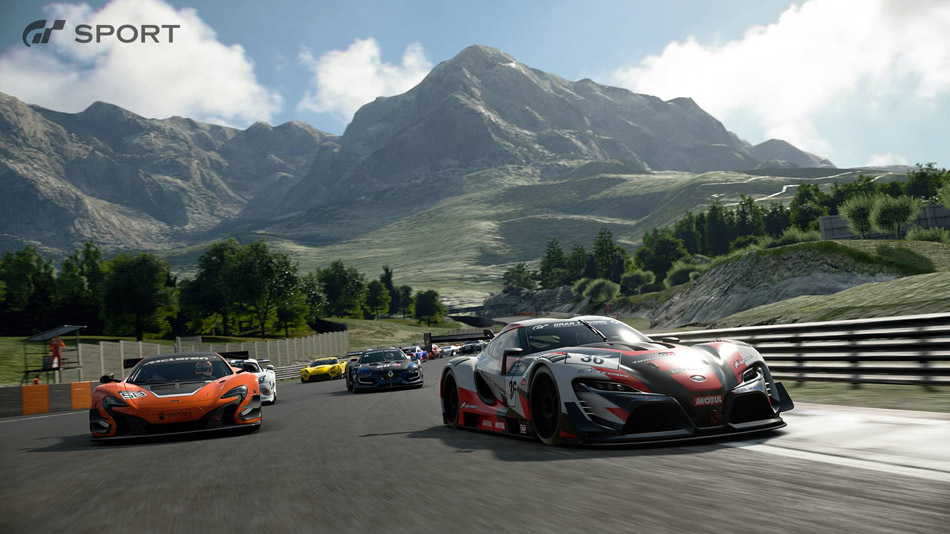 But what it really wants you to do is understand what’s actually happening when you drive. The game is all about weight distribution, traction and discipline, to the extent that the single-player mode isn’t really about racing at all (with the exception of the returning-but-somewhat-sidelined Arcade Mode, which is fun but throwaway). If you’re playing solo, this is a driving game. The main mode takes you through an ultra-punishing driving school, requiring absolute precision if you’re to walk away with the complete collection of gold medals. Prepare to get very frustrated when you can’t get gold on a simple ‘turn the steering wheel’ exercise. Never has a tenth of a second felt so unassailable.

Single player also offers a collection of scenarios to overcome, like a lap of fuel-saving while still trying to pass cars for the win. There’s also a nice little track mastery section that grades you on individual sectors on a collection of the circuits. Finally, you’re asked to perform a perfect lap to get one last gold award, which also gives you that course’s map as a decal with which to adorn your car. Most of the mastery challenges are are easy if you know what you’re doing, but the Nurburgring challenge is gargantuan. Six minutes of absolutely flawless driving through the Green Hell? That’s going to take some doing. 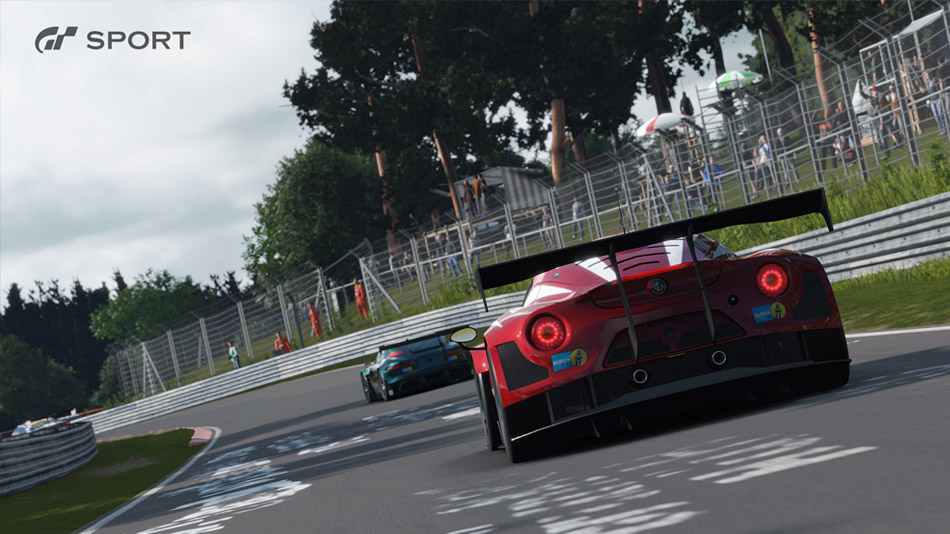 However, it’s all rather pedestrian, and not a patch on Forza 7’s Forza Driver’s Cup career mode in terms of excitement and involvement. In fact, it’s closer to the PSP Gran Turismo’s single-player content. Very, very similar. Careful you don’t get splinters from the over-scraped ideas barrel. No, instead you’ll probably spend most of your time online.

The online mode takes centre stage and features two pillars. You can race however you like in the lobby mode, but you won’t earn any reputation. For that, you need to enter into championships in the Sport mode. This is the game’s main selling point – an FIA-recognised, online racing league with the potential for real-world acclaim. The game keeps you playing rather than waiting in lobbies, allowing you to post ever-faster qualifying times while you wait for entry to start, then allowing you some practice in the couple of minutes prior to the green light. 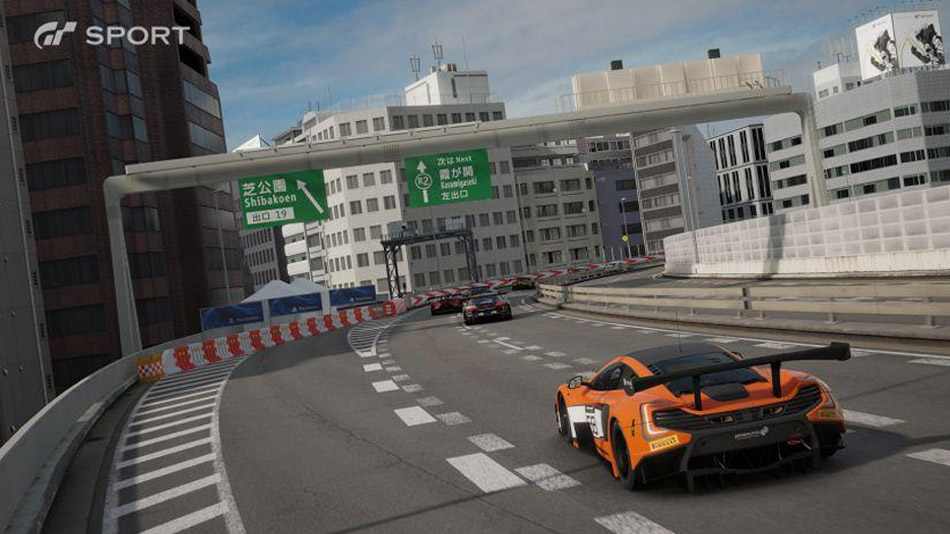 It works very well and, if your room is full of people who respect the rules as much as you, the racing is awesome, with clean, close races full of defensive maneuvers (but not weaving, we promise, Mr Turismo). The subtle proximity indicator is clever, adding a vignette-like shadow to your left or right when there’s a car nearby. Much cleaner than the mess of coloured arrows flying around the screen in Forza 7. Winning a slipstreaming race around an oval against real opponents is far more exciting than any offline mode. And with the real-world calendar of events taking place at set times, it all feels like it really means something.

But that’s when it’s working. If at any time the server goes down for maintenance, or you lose your own internet connection, you can only play Arcade Mode, as the game will not allow meaningful progress in any form if you’re not connected to the server. The game is essentially off-limits until the server says hello again. Presumably this is to keep an eye on cheaters, but it would be nice to be able to at least browse the garage, take a photo, or design a new decal while you wait for the connection to come back up. 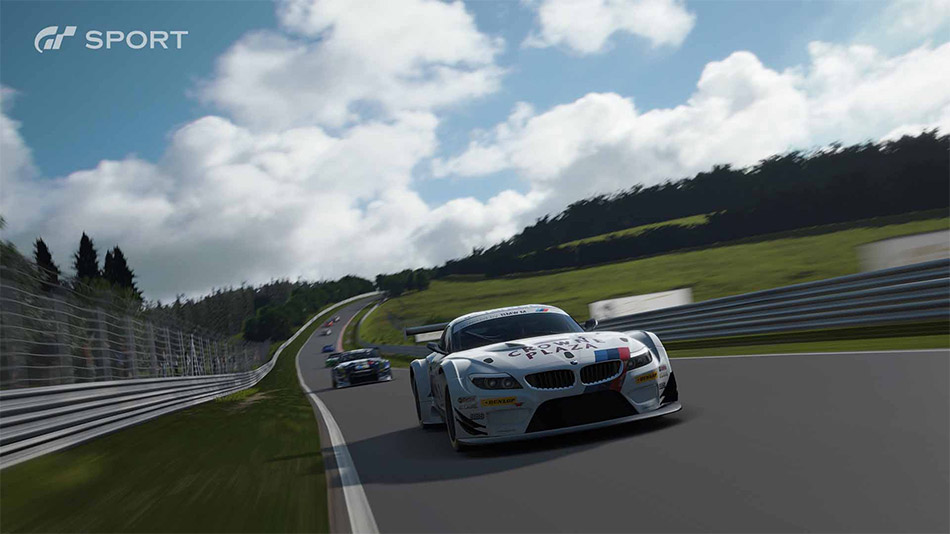 It takes itself very seriously, but that can come across as po-faced. It feels like a premium product, certainly, but there’s a hint of that Gran Turismo 5-era pomposity that looked to have been eradicated with Gran Turismo 6. And sometimes it feels like you’re playing an old racing game from the early 2000s, only with far better graphics. It’s nice in a way, as it’s a reminder of the golden age of racing games. But when the competition is striding forwards, it can feel a tad embarrassing, with the series steadfastly refusing to look over its shoulder at the competition, even when they’ve already gone by.

It’s also less spectacular than you might expect. Nothing major, but a few scrappy shadow edges, the occasional frame hitch, and some very diorama-like foliage make for an unconvincing world, especially when the colours are more gamey than lifelike. It’s still gorgeous at 60fps, and the glass effects are mouth-wateringly good, but the overall effect is not as photorealistic as its competitors.

Gran Turismo Sport is still reluctant to get its suit dirty, too. Damage modeling is extremely weak, and impacts with other cars and barriers are poor. Compared to Forza’s deep-sinking tyre walls, GT Sport’s rock-solid barriers make this feel like a PS2 game. None of this is dreadful, but it is noticeably behind the curve in many areas.

I don’t want to sound down on it because, in isolation, Gran Turismo Sport is a superb racing game. It’s everything it should be. Faithful to its heritage, with gorgeous cars, superb tracks, time-of-day variations, exquisite handling, an ultra-serious online mode and a challenging, genuinely educational single-player component. It’s the best serious racing game on PS4, no doubt. And with Forza 7 on Xbox One and Gran Turismo Sport on PS4, both camps have a truly great racing game to enjoy. But, having played both a very great deal (and Project Cars 2 as well), Forza 7 is demonstrably better than GT Sport in pretty much any area you could choose. It’s now down to the community to see which game provides the superior online experience. See you online.

Gran Turismo Sport is a bona fide virtual motorsport and that’s awesome. But single-player modes are lacking and it’s demonstrably outshone by Forza Motorsport 7 in virtually every area. 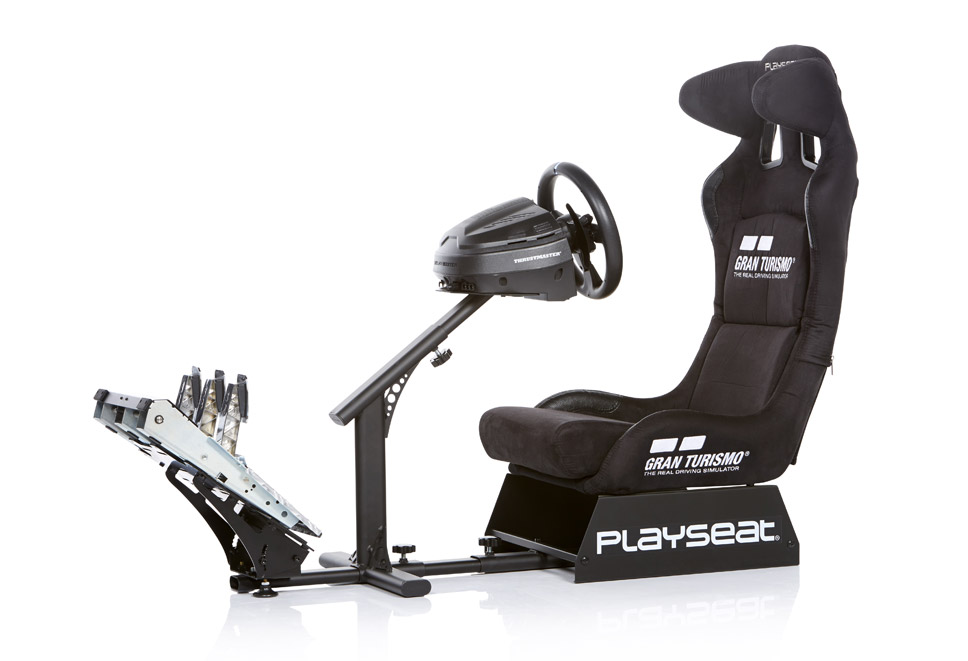