The ultimate racing experience?
A few years ago the market for PC racing peripherals was literally being swamped with products that were of dubious quality to say the least. Meanwhile its seem as though the majority of the brands that once produced racing wheels have retreated from an over saturated market segment. This has left only two manufacturers who are still releasing products for the mainstream market: Logitech and Thrustmaster. This development in the market is not necessarily a bad thing, as over the last couple of years Logitech has released high quality products time and time again, thus garnering itself a substantial loyal fan base. Logitech’s first MOMO steering wheel and later on its Driving Force Pro (DFP)-which was a PS2 release- were instrumental in establishing the company as a top tier manufacturer for Racing game simulation peripherals. 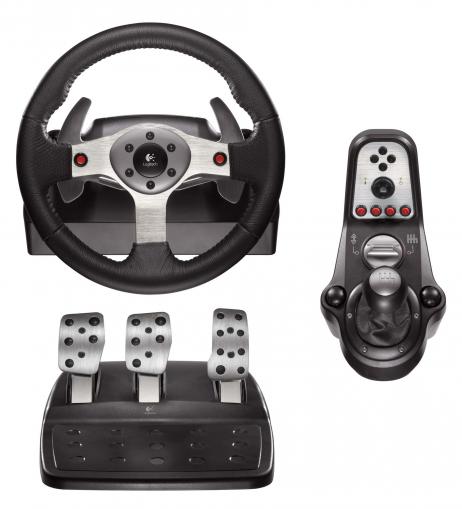 Logitech’s latest true driving simulation release, the Logitech G25, is a force feedback racing wheel which at first glance seems to have been redesigned from the ground up. The list goes on and on: Strong Force feedback effects, high end finish and a pedal set which incorporates three pedals instead of the usual two. The coupe de grace is the gear shift that allows you to choose between using the standard six speed H pattern to change gear or the sequential shift. All in all this promises to provide the ultimate racing experience for at home and we couldn’t wait to try it out.
High End
For the racing sim fanatics out there things just cant get realistic enough and there are several specialist manufacturers who cater to their needs. Brands like Frex, Virtual Performance Parts and NIXIM build specialised steering and pedal sets which are practically indistinguishable from the real thing but which would cost you an arm and a leg to purchase, for example you could easily spend in the excess of a thousand Euro before you had a complete set. Most people aren’t crazy enough to spend this kind of money on a steering wheel but there is a substantial market for people who demand a bit more quality than what is currently on offer from most plastic steering wheels and pedal sets.

The wheel is is encased in hand stitched leather.

With the G25 Logitech aims to meet the needs of this niche market and this becomes abundantly clear when you open the box. The steering wheel looks like it was taken out of a real car: The centre of the steering wheel is crafted from stainless steel whereas the wheel itself is encased in hand stitched leather, the wheel is also devoid of most of the Superfluous buttons that litter most other steering wheels thus enhancing the realistic look and feel. Like the DFP before it the G25 is capable of 900 degrees of wheel rotation equating to 2-1/2 turning times from lock to lock which is ideal for any racing simulator with touring cars in it. On the rear side of the wheel we find the sequential shift paddles which can be used to shift either up or down and these too are made of stainless steel.
The sequential shift paddles are made of stainless steel.

Mounting the steering wheel to your Playseat simulator can be accomplished in several ways. The steering wheel makes use of a dual clamping system and with the aid of two plastic screw knobs, located on the top of the main wheel enclosure, can be mounted on your Playseat chair top arm. After tightening the knobs these can be sunk down into the casing by pushing down on them and turning them a quarter way thus ensuring that these don’t stick out obtrusively. The Playseat chair driving wheel holder has been made to fit perfectly to the Logitech G25. 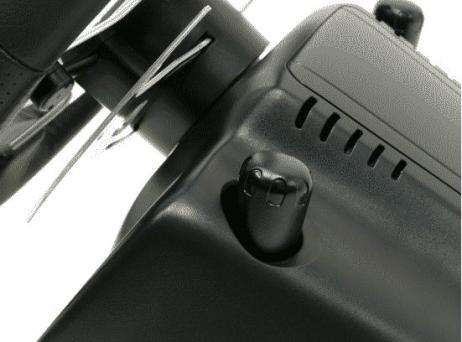 After tightening the knobs these can be sunk down into the casing by pushing down. This action fixes the wheel to the metal plate of the racing frame.

An extra that will be greatly appreciated by the somewhat more serious sim-racers is the option to attach the wheel to the game seat raceframe through the two threaded screw holes located on the bottom of the unit, this allows the steering wheel to be attached securely to the metal frame without fear of it moving around. 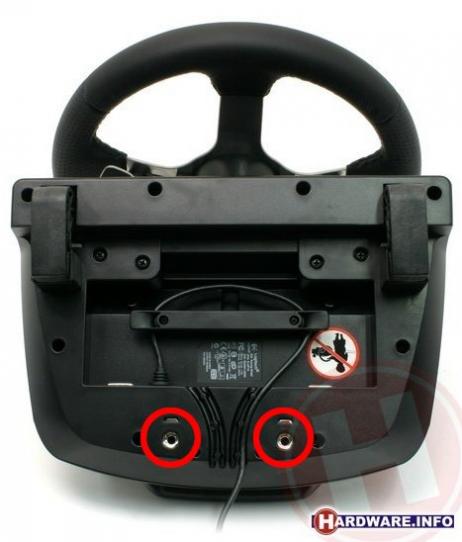 The steering wheel can be mounted by using either the dual clamping system or the threaded screw holes. In the Playseat chair box you will find the screwa to fix it firmly (see red circles).

The pedal, gear shift and power supply are all attached to the main steering unit. Logitech uses male and female 9-pin connectors for the cables. 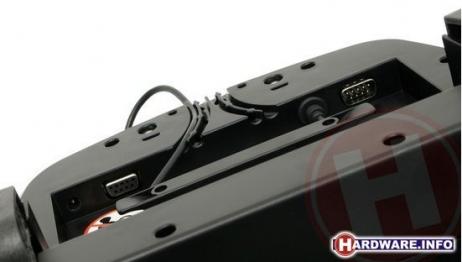 When the main unit is attached to your table top it is virtually impossible to disconnect any of the cables.
The pedals and shifter are connected to the main unit.

Force feedback is present on the G25, as can be expected from a Racing wheel in this segment but Logitech have taken this technology a step further and set a new level or realism. Whilst the Driving Force Pro was lauded for its Force feedback effects, the G25’s Force feedback is far more refined than that of its forebear. Starting up the first game the differences are immediately apparent: The power transfer is fluid and, whereas in most force feedback wheels you get an almost “sawing” motion when you try and steer against the power flow, in the G25 this translates into a fluent motion and feels natural. Unlike most steering wheels that have Force feedback you don’t get that cheap “click, clack” noise when steering like you did with the Driving Force Pro. 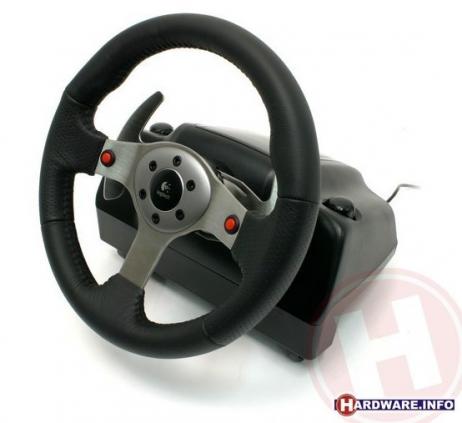 Luckily Logitech did not have to sacrifice power to accomplish this and a nights hard gaming will leave you with aching muscles, thankfully Logitech have included the possibility to change the amount of force feedback to suit your taste in the control panel. The G25 utilizes two force feedback motors to ensure fast reaction times in both steering directions, and the steering column uses ball bearings for extra durability. Due to the precise and fluid power transfer of the steering wheel even the smallest and most subtle force feedback effects are relayed effectively to the user. Let there be no doubt, Logitech have set the new standard in Force feedback.

Something we haven’t seen before from Logitech is the separate Shifter unit that comes with G25. Though to be honest the idea of a separate gear shift is not exactly new as it was implemented before by Act Labs. The gear shift itself has a cover like a real one and the Gear knob is upholstered in real leather making it that extra bit tantalising. The gear shift of the G25 is multifunctional in that you can either use the sequential mode by shifting the gear lever up or down, which after release pops back into the centre position, or by selecting the standard H shifting pattern. To select the standard H shifting pattern you must press down and turn the large knob just above the gear stick, after doing this you can move the gear stick as you would in a normal car with six gears. 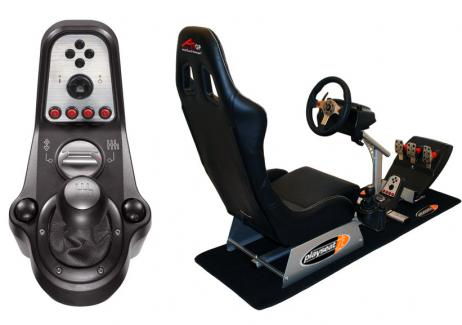 Selecting reverse is done by pressing down on the gear stick and moving it to the same position as you would for sixth gear. To be able to utilize this direct way of changing gears the game in question must of course support it. The way this method works is that every different gear selected is in essence a different button which remains depressed as long as a certain gear is selected. If the stick is in the neutral position then you are in fact not selecting anything. The method used means that a game must support the use of different buttons for each different gear, if this is the case than there should be no problems in using the H pattern gear shift. There are several additional buttons on the gear shift unit that can be programmed to the users requirements, there is also an 8-way viewfinder incorporated in the design. Overall the Gear shift is a joy to behold and use in both sequential mode as in the H pattern, also the additional buttons and view finder feel solid and well built.

Mounting the Logitech G25 Gear Shift on a stable position

Like the steering wheel, the gear shift has to be attached to the metal raceframe before it can be used. The unit uses the same mounting method as the steering wheel with the knobs that can be sunk down into the main unit. There is a third plastic screw present at the rear of the unit which stops the unit from tipping over when shifting up. The unit also has threaded screw holes on the base so as to allow installation on a raceframe. 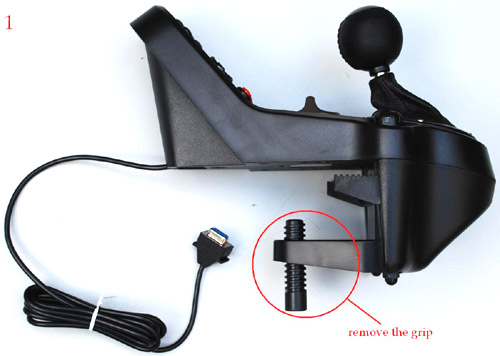 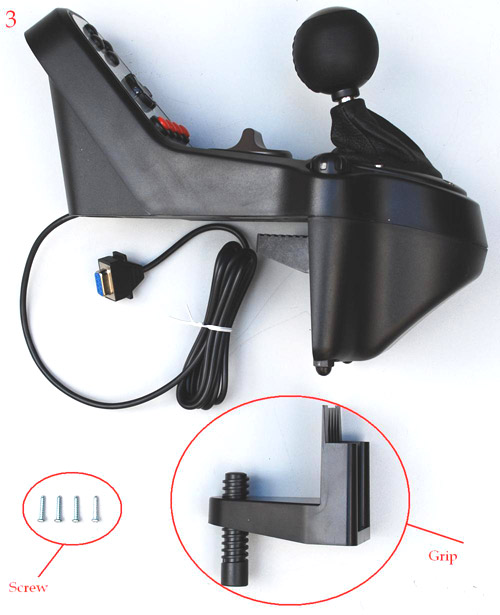 The base unit to which the pedals are attached is large and solid, Logitech has also fitted its “exclusive” carpet grip system that allows the unit to be used on carpet floors without having to worry about it sliding away underneath your feet. The carpet grip system folds out and has a multitude of little spikes which “bite” into the carpet thus holding it to one spot. The same system is used on the DFP and guarantees a firm grip on most carpet types. Like the steering wheel and the gearshift before it, the pedal unit has no less than six threaded screw holes which allow it to be anchored to a raceframe or particular spot if the user wishes to.

Pedals can make or break a steering wheel set, and with the G25 Logitech has looked carefully at its previous designs and what could be improved overall. The first thing we notice when we take the pedals out of the box is that the unit has three pedals instead of the more common two. Instead of having just a gas and brake pedal Logitech has seen fit to include an analogue clutch pedal! The thing that stands out most about the pedal unit is the material used to construct the pedals, all three pedals are made of stainless steel and not only does this make them feel extremely solid during use but it looks really cool too. 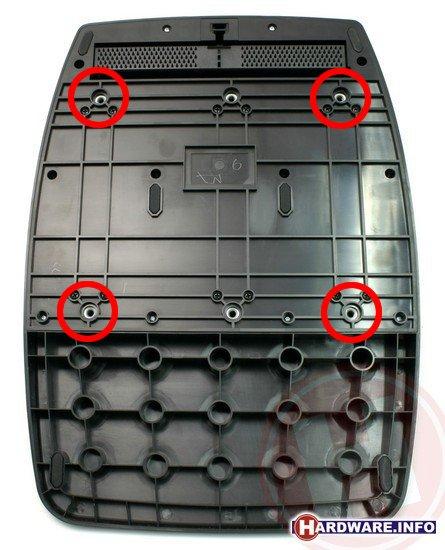 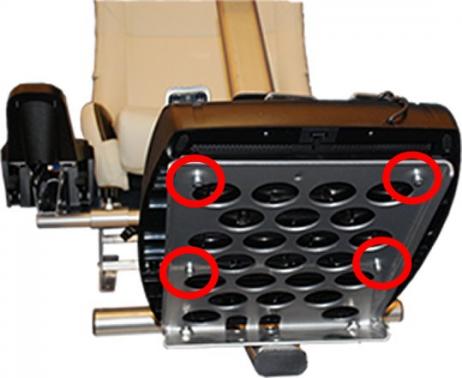