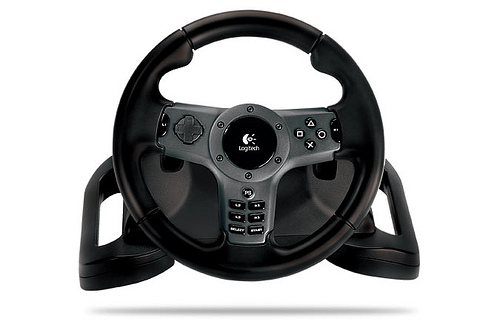 If playing racing games with a controller feels unnatural to you, you’re not alone. Purely from a driving perspective, a console controller looks nothing like the a steering wheel, and if you’re looking to inject a modicum of realism into your driving experience you’ll need to pick up a racing wheel. With that in mind, Logitech sent GGL its new Driving Force Wireless wheel for the PlayStation 3 to put through the paces.

Is it at a high level? Let’s find out.

What’s in the box

The Driving Force Wireless is a one-piece setup with no pedals. That’s right, no pedals. Included in the box is the wheel, power adapter (yes, there’s one cord) and a 2.4Ghz wireless USB receiver that plugs into the PS3.

Setting up the DFW takes about 20 seconds. Plug in the power pack to your outlet and into the back of the wheel, and put the USB stick into one of the PS3’s USB ports. There’s nothing complicated going on here and you’re not required to adjust any settings to begin. 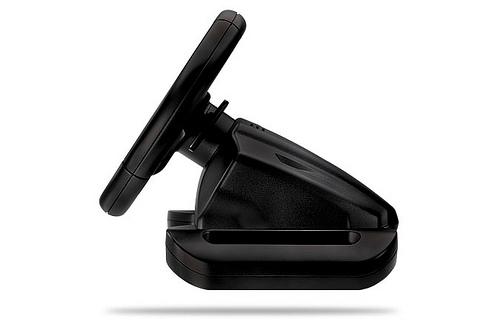 Hands-on, the steering wheel itself seems a little bit small on the Driving Force Wireless, but adequate enough for our use. One of the first things you’ll notice about the DFW if you’re a seasoned user of racing wheels is that there is no table clamp. The wheel is designed to sit in your lap only, which means it’s designed for couch gamers only. This is an important concession that kind of takes racing sim fans out of the picture (and forces them to buy another, possibly more expensive, wired Logitech wheel).

This is probably the same reason Logitech excluded pedals–that, and to meet the $99.99 price point. Without the pedals, you’ll find yourself accelerating and braking using the paddles behind the wheel. These paddles are normally reserved for paddle shifting, but since the alternative is accelerating with a button on the face of the wheel, the paddles are the lesser of two evils. Let’s just put it this way: Without pedals, the button setup is less than ideal.

Underneath the wheel there are two curved pieces of plastic that mold around your legs. They move in and out to accommodate a comfortable seating position, but it doesn’t seem like they can be removed completely to clamp the DFW to a table.
So, you’ll always be using the DFW in your lap, which is fine if you’re in a living room but not if you want a sim experience.

Let me first say that I am a racing newbie, and especially a racing wheel newbie. I can’t say I ever drove well with the Driving Force Wireless, but I can’t with the controller either.
I gave the DFW a go around a couple of tracks in the Japanese version of GT5 Prologue and was pleased with its not-too-powerful force feedback. Having used Microsoft’s Xbox 360 racing wheel and experienced what I consider “too much” force feedback, this was a step in the right direction. For me, the amount and strength of the force feedback was just right.

However, the real racers at the office told a different story. Eugene Lee (one of GGL’s developers) and Amir Haleem (resident mutant) were both immediately dismayed by the DFW’s lack of pedals. Full disclosure: Eugene owns the simulator-grade Logitech G25 Racing Wheel and Amir owns his own race car.
Eugene originally passed on even laying his hands on the DFW. It didn’t sound good.

Eugene: “It’s better than a controller…”

The hardest of the hardcore racers won’t be pleased with anything short of a racing cockpit, and that’s not the segment of the market that Logitech is aiming at with this device. If you play games while on the couch, hate extra cords and can’t figure out how to keep racing pedals planted firmly on your carpet, the Driving Force Wireless should be more than adequate for your needs.

If you absolutely need a table clamp, shift stick and massive force feedback, give the Driving Force Wireless a pass and check out some of the other Logitech Wheels. The Driving Force GT or G25 should be more your style.
The Logitech Driving Force Wireless receives a GGL score of 7/10. A set of wireless pedals would have really helped out here, because accelerating with the paddles seems even more unnatural, dare I say, than playing with a controller.