When it comes to racing simulation, nobody has been doing it longer and with as much success as Logitech. It pioneered the multi-tier library by offering high-quality options ranging from the MOMO Force Feedback Wheel to the console friendly Driving Force GT and the widely admired G27.

This month Logitech debuted the spiritual successor to its best-selling G27 with what it calls the Logitech G29 Driving Force Racing Wheel. With photogenic build quality it has captured the interest of both racing simulator fans with years of experience and car enthusiasts who may be looking to dive into simulation for their first time. Both parties will be happy to hear that the G29 is a well-balanced product that offers a compelling experience for users of all types.

The G29 comes with pedals and a base. The pedals have a retractable carpet grip that is effective at preventing the unit from moving when placed on carpet. Meanwhile, multiple rubber feet provide traction if the pedals are used on a hard surface such as tile. With these two solutions the pedals can be easily set where you find them most comfortable whether or not you’re using a third-party mount. 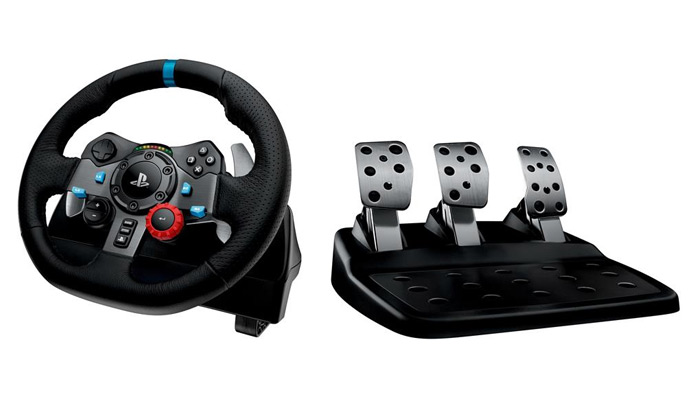 The base is more particular when it comes to installation. For one, you need to find a surface, preferably a desk, that is stable enough to avoid violent shaking from the base’s powerful force feedback, yet thin enough to fit within the two clamps that the base uses. In my case, I found that my desk was too thick at two inches in diameter and immediately purchased the pricey but highly-effective Wheel Stand Pro. The base has several tapped hole locations making it compatible with a variety of mounts on the market.

The pedals and base have a total of three cables: one for power, one for USB, and another that routes from the pedals to the base to provide communication. Since everything is constructed and ready to go out of the box, preparation is as simple as connecting the three cables and mounting the base. You can be using the product within 10 minutes of unboxing.

Logitech’s G29 has been licensed for Sony’s PlayStation console products. So, in addition to having a presence on PC, it also runs remarkably well on PlayStation 4 and PlayStation 3. Use on PC is as simple as installing Logitech Gaming Software and then heading into one of any number of racing games. On PlayStation it’s plug and play. 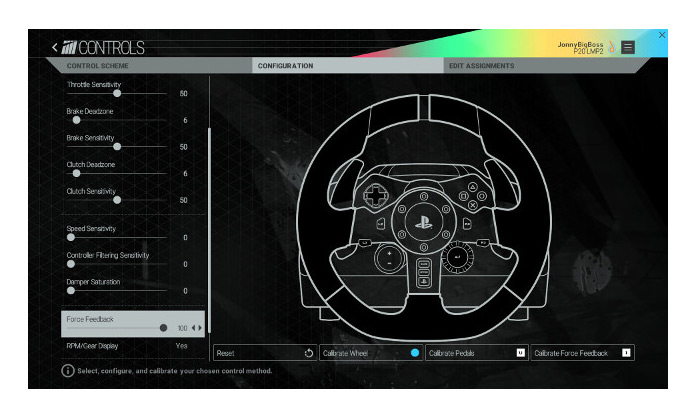 The hand-friendly button layout on the wheel makes navigation on all three supported platforms intuitive. Made better, they are clicky with a great tactile feel that no other wheel in the industry does better. With over 14 inputs, all of which can be pressed without removing your hands from the wheel, you won’t find yourself apprehensive when navigating menus with the device.

At present there are only two titles that have software built specifically for the G29: Driveclub and Project CARS. The wheel has configurable settings for both of these games providing a wide breadth of options for items ranging from sensitivity for all three pedals to damper saturation. There’s even an LED RPM indicator on the wheel that can be surprisingly helpful when turned on. If you choose to play a game outside of these two titles, in most situations the wheel will be recognized as the last-generation G27. Due to the similarities between the two this doesn’t pose a significant problem but will result in a less optimized environment.

The Base and Wheel

Logitech experienced remarkable success with its G27, and the G29 is a case of “if it ain’t broke, don’t fix it.” The base uses Logitech’s long-touted helical gearing which is similar to what you would find in car transmissions. It’s been carefully crafted with anti-backlash hardware including steel ball bearings in the wheel shaft as well as a hall-effect steering sensor to track movement of the wheel. Smooth wheel motion is the result. This is helical gearing at its best. 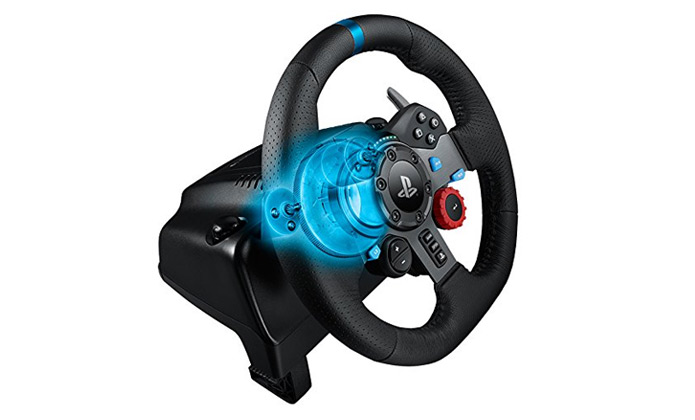 The wheel measures at over 10 by 10 inches with 900 degrees of rotation. Equipped with dual-motor force feedback, road feel is fantastic. Small inconsistencies in road texture can be felt, in addition to other subtleties including high surges of torque when downshifting. The wheel constantly communicates information to the driver, allowing experienced users to achieve record lap times in the process, and without some of the noise emitted from previous Logitech devices.

One inherent shortcoming of helical gearing systems that hasn’t been resolved this generation is the presence of a dead zone. Feedback can only be felt when the gears aren’t centered, so when you’re in situations such as driving at high speeds down Nürburgring​’s Döttinger Höhe,​ you’ll find the feedback to be calm and muted, although the deadzone appears less pronounced than the last generation of Logitech wheels. When it comes to feedback belt-driven bases such as that of the Thrustmaster T300RS, they tend to perform better and have no deadzone. However, these advantages come at a cost. While they are subject to much higher kinetic energy as well as shorter lifespans, Logitech’s helical gears don’t require dedicated cooling systems and last many years without repair.

Where the G29 shines above and beyond the competition is with its pedals. Out of the box the accelerator, clutch, and especially the brake are well-tuned. In previous generations it was common for racing simulator enthusiasts to spend a great deal of time configuring their pedals. That will happen far less often with this generation. As someone who drives a 2008 Volkswagen GTI with manual transmission, the pedal experience on the G29 isn’t far from my real-world driving experience, which is an exceptional achievement. 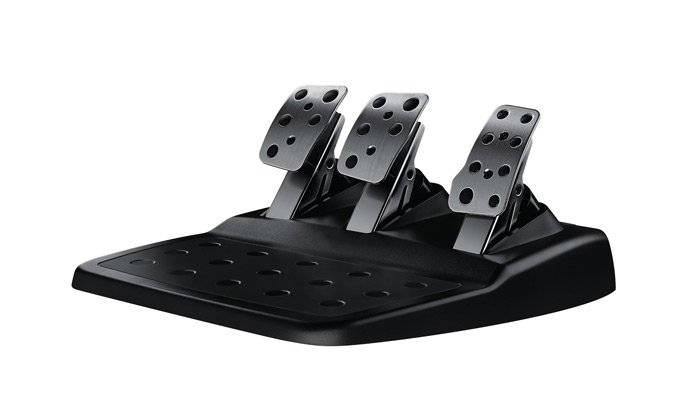 The accelerator and clutch are set to be mild in resistance at default and have great range. They are most similar to that of Subaru’s WRX pedal configuration, which would be considered a great quality configuration by many enthusiasts. Meanwhile, the brake has strong resistance, simulating the feel of driving brake pads against a rotor. During hard braking situations like that of Monza’s Variante del Rettifio, there is a great sense of context to the experience of forcing a heavy object from top speeds down to under 20 miles per hour.

There has been a ton of attention spent on ensuring that the racing simulation isn’t fully reliant on the digital side of the experience; the physical construction of the G29 is equally as remarkable. As a result the G29 package trumps the competition when it comes to build quality. 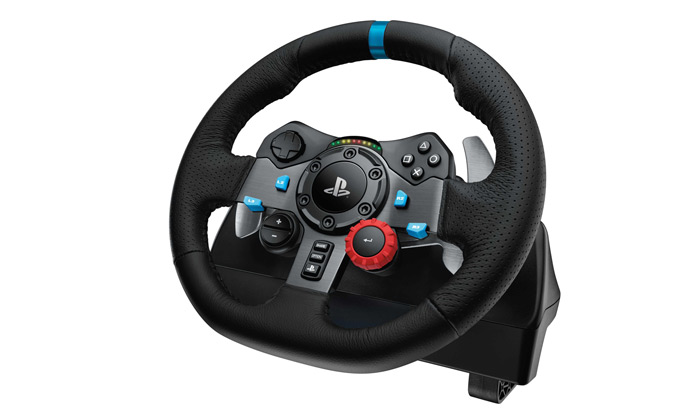 The pedals are equipped with cold-rolled steel and brushed stainless steel over polyoxymethylene piston sleeves. Its paddle shifters are constructed of stainless steel. Meanwhile, the wheel spokes are crafted of anodized aluminum with hand-stitched leather wrapping the wheel to provide the highest-class physical experience of any racing wheel to-date. With an LED RPM indicator at the top, you may just find that this wheel is better than any real car you’ve ever driven.

The G29 is one of the best racing wheels ever made. Those who want a well-rounded racing wheel out of the box will have a hard time finding anything as solid as the G29. Its wheel and pedals have been constructed with only the finest materials, and have been tuned meticulously. With PC support as well as PlayStation licensing it will be the premier go-to option moving forward with the biggest PC and PlayStation releases, including the inevitable debut of Gran Turismo 7. 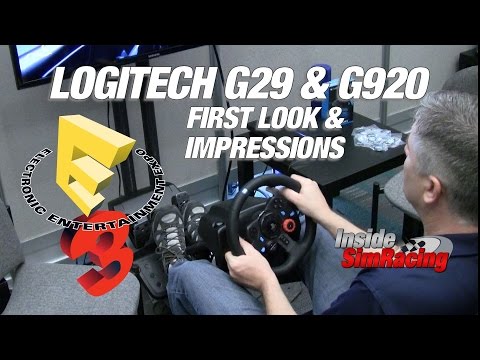