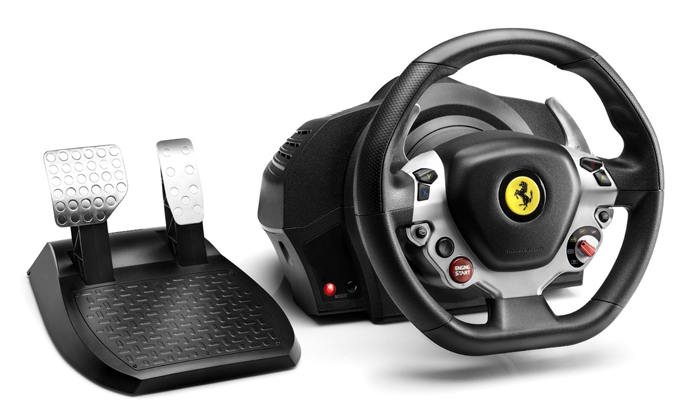 In case you didn’t notice from the heading above, this racing wheel has an absurdly long name, and such, I’ve taken to just calling it the Thrustmaster TX. The $400 racing wheel doesn’t currently have any competition, at least on the Xbox One. On the PC, there’s a slew of racing wheels, and I will save you some time right now by stating if you don’t need a wheel that works with Xbox One, there are better, more reasonably priced options to use with a PC — for example, Logitech’s G27 — and you should absolutely buy one of those.

Now, if you do want to be able to play Forza, the Thrustmaster TX is your only option. It comes from a company that is known for making high-end racing wheels, so you can buy it knowing that the company reputation for producing excellent gaming hardware.

One very key feature of this wheel, and the main reason it is so expensive, is force feedback. Generally, cheaper wheels will not have this option, and it really does make for a more authentic experience.

Sadly, my first impression wasn’t positive. The first racing wheel we received was dead on arrival. It may have been a rare anomaly and not indicative of the quality of the product as a whole, but it’s still something to keep in mind. Thankfully, we were able to exchange it for a working unit in a timely manner.

One thing you will most certainly notice is the size of the box. With the motor, wheel, and pedals, it’s an absolute monster of a package. The packing was well thought out, and the wheel was protected during transit. 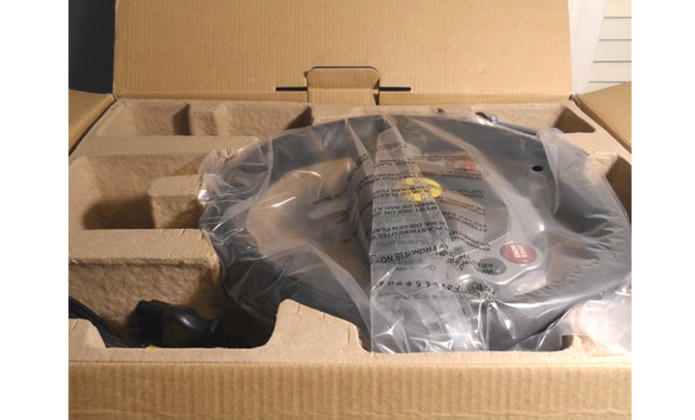 Putting the wheel together and get it up and running is a bit of a process. First, you have to attach the wheel to the motor, which is done with a simple screw and fastener. You also need to attach the plastic arm that allows you to mount the wheel to a table (which is pretty much required to use this thing). Then, you will need to connect the pedals through a simple cable. It took me about 5 minutes to get it going, which isn’t too bad. 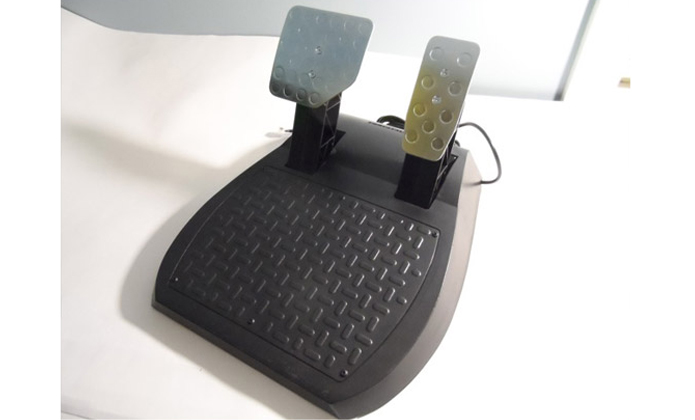 Once you have it set up, plug it into the Xbox One and then it will calibrate automatically by rotating the wheel back and forth until it’s aligned.
Other than the first wheel being broken, my impression of everything else is pretty good. The wheel feels well-built, the assembly wasn’t too bad, and it interfaced with the Xbox very easily. I was little concerned with the size of the pedals, as they are very light, and they didn’t seem overly stable which could negatively impact gameplay.

Thrustmaster TX Racing Wheel Ferrari 458 Italia Edition racing wheel is a beautiful piece of hardware. It’s a 7/10 scale replica of the Ferrari 458 Italia wheel, and it does look quite authentic. It features a simple black and silver color scheme with highlights of red and yellow which make it pop. The base of the pedals are black, and the actual pedals themselves are silver.

While we are the subject of the pedals, they are by far my biggest issue with the wheel. They are clearly designed to be used in a racing cockpit where they are locked in place, as using them on the floor is almost impossible. What I ended up doing to make using it more comfortable was put my left foot on the base, and use my right foot to push the pedals. I tried wedging it against a box, but I still found they did not want to stay in place without some weight on top of it. For $400, having pedals that will not stay put during gameplace was a serious drawback. 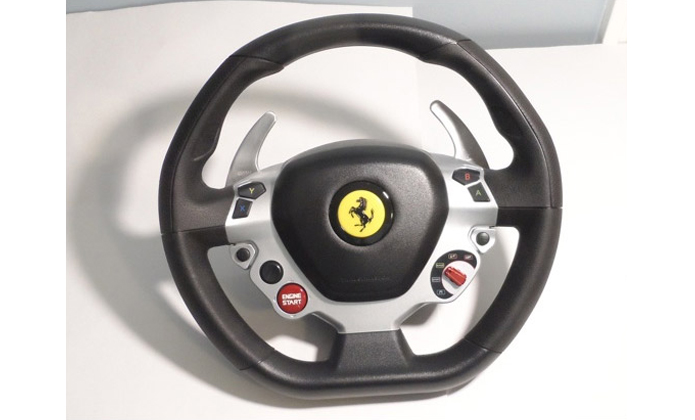 You can buy better pedals, one of which comes with a clutch instead of just the two pedals offered with this model. We have not tested those, so it’s hard to say if they offer better grip and performance. Still, aftermarket pedals or not, we expect better from a device this expensive, and the pedals ended up being a major sticking point in our enjoyment.

As far as the wheel, the force feedback is extremely active and it helps to creates a far more authentic driving experience. One thing that is important to note about the force feedback is that it makes playing impossible without mounting the wheel to a table. It goes absolutely crazy if you simply place it on your lap. You can disable the feedback, but that’s a big portion of what you paid for. So if you aren’t going to use it, you are overpaying by a lot. Basically, if you aren’t planning on fixing this wheel to a solid surface, you are going to have a bad time.

Racing On The Xbox One

So the main selling point of this particular wheel is the fact that it works with the Xbox One, and there aren’t any other options on the market. It was a smart call by Thrustmaster to get to market before a slew of others could come along, because it allows them to cement themselves as the frontrunner in this class. But even though it’s first, does it really deliver an experience that makes it worth spending so much money on?
As I said previously, getting the wheel up and running on the Xbox One is incredibly easy. You simply plug in the power cable, connect the pedals, and plug the USB cable into the Xbox One. An annoyance of the console itself comes into play here, because there are no USB ports on the front of the Xbox One. Instead, there is one on the side of the console, and because my entertainment center is packed to the gills with consoles and my cable box, this is a problem, and I assume I am not alone here. Of course, this isn’t Thrustmaster’s fault, but it’s still an annoyance you are going to have to deal with. 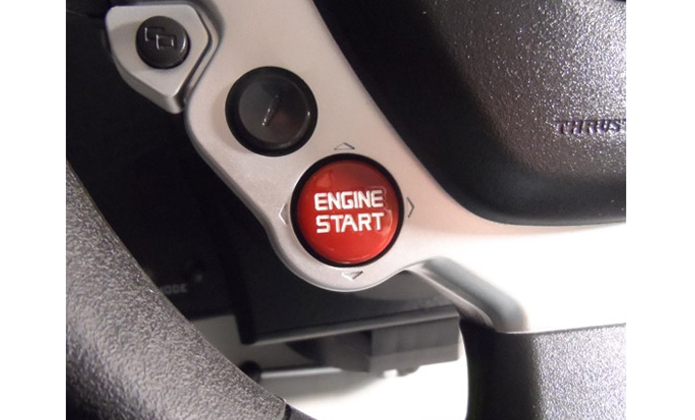 Playing Forza 5 with the Thrustmaster TX is downright awesome. However, my living room doesn’t have a table to comfortably mount the wheel, which made using the wheel a challenge. I did manage to play with it on my lap, but as I said before, this is not a great experience, and it required me to disable the feedback in order to have any fun. That aside, the wheel takes Forza 5, which is easily one of the most authentic racing experiences you will find, and cranks it up to 11. It feels as close as you are going to get to sitting behind the wheel of a sports car in video game form.
In the end, if you want a racing wheel to pair with your Xbox One, this is it. Could better wheels with a more affordable price tag hit the market soon? Almost certainly, but if you can’t wait, this will do the job.

Racing On The PC

The Thrustmaster TX will also work with a PC, but the process is not quite as quick to get going. You will need to go to the Thrustmaster site and download the drivers. Then, you will need to update the firmware using the software. It’s not a hard process, thankfully, so you can get it done in just a few short minutes.

Once you have the software installed, you can test out the different types of force feedback the wheel offers. I found this to be more fun than it should be. The wheel gets really crazy when moving on its own without your hands on it, and as such, I spent at least 10 minutes watching it rotate in all kinds of crazy patterns that you could find in a game.
Actually playing games will vary depending on the one you are running. Most games will require you to bind the controls manually, but this is pretty on par for the course when you are talking about any kind of PC game controller. 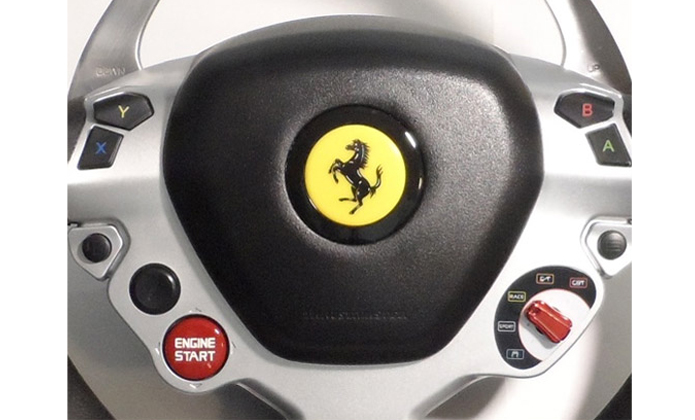 I spent most of my time playing Dirt 3, which did not work with the force feedback. By default, the dead zone on the wheel felt a bit to large as well, but the software lets you adjust that, and once it was tweaked, I actually had a really good time with the racing wheel mounted to my desk. The problem with the pedals persisted, and it’s one I just can’t get past with this particular model wheel. It doesn’t matter whether it’s hooked up to an Xbox One or PC, the pedals still feel cheap, and they really degrade the overall experience.

All in all, I can’t say I’m in love the Thrustmaster TX Racing Wheel Ferrari 458 Italia Edition. Nor do I hate it. It has some positives, such as some incredible force feedback, a good feel, and it looks sexy. But the pedals are weak, and the asking price is too much. If you are an avid racer and plan on putting this in a dedicated cockpit, it’s awesome, but for the average gamer, I have a hard time recommending it. 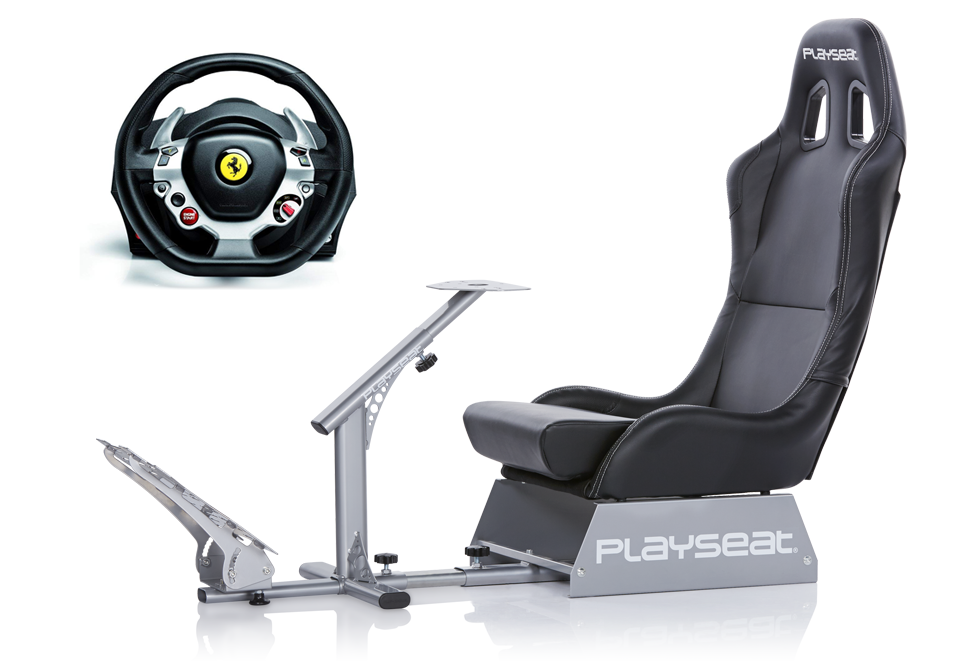